Last week we had the annual Ivor Russell trophy, which represents prints taken in Carmarthenshire in honour of Ivor Russell. In attendance was Mrs Russell together with her son and daughter. After an introduction by our president Ray Rees the judge Nick Jenkins began his critique of the 16 prints submitted, this was a slightly reduced number based on the previous 3 years we have been running this competition, however the quality of the entries made up for this.

After a very good critique by Nick we had an excellent buffet supplied by the members after which the winners were announced. As this is a special one of trophy only the winner is given recognition, however the top six were indicated on the night and it was a close run thing as Nick pointed out. 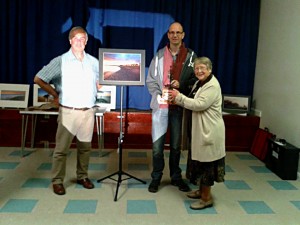 The eventual winner was Jason Dale with his ‘Machyns Sunset’. Above is a picture of the presentation to Jason with Nick Jenkins on the left and Mrs Russell presenting the trophy on the right.